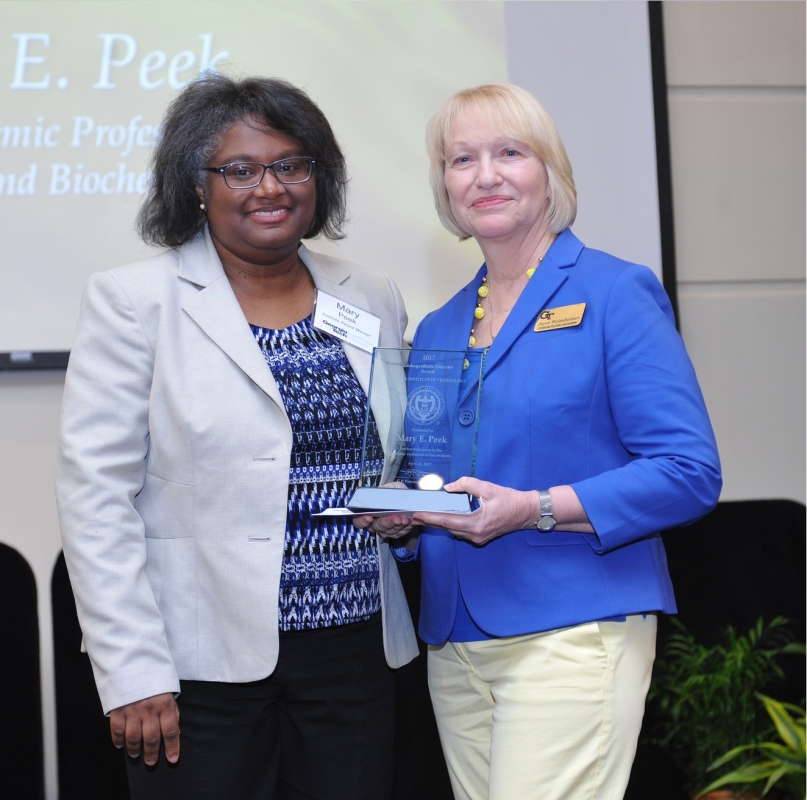 This award, which was offered for the first time in 2009, provides Georgia Tech with the opportunity to recognize the outstanding contributions that non-tenure track faculty make to the education of students on campus. Recipients will each receive $3,000. Up to two awards will be given each year, depending on the quality of the nominations. No more than one faculty member from a college will be selected annually. Note that the selection committee can decide that no award will be given in a particular year.

The nomination packet (which should be no more than 15 pages) should be submitted as a PDF file to Georgia Tech's awards portal: https://gatech.infoready4.com. It should include the following items:

It will be up to the selection committee to set the exact criteria for the award, but it's expected that the committee will consider the following:

Mary Hudachek-Buswell, Lecturer, Division of Computing Instruction (Nomination Packet)
Dr. Mary Hudachek-Buswell covers a variety of courses taught in the College of Computing at both the introductory and higher level, working with around a thousand students every semester. In working with such a large number of students, Dr. Buswell works diligently with each individual, even individually reaching out to struggling students or who need special accommodations. She’s also heavily involved in the computing community on campus beyond her courses as a mentor for undergraduate teaching assistants and for a team in Idea to Prototype, which is a part of the start-up program Create-X, and has served as a judge for HackGT. Further beyond, she teaches a robotics unit to elementary schoolers and gives her computer science students the opportunity to help teach children about computing. Academic Professional Melinda McDaniel referred to her as, “a great role model for me and many others at Georgia Tech who value excellence in teaching.”

2019
James Rains, Professor of the Practice Biomedical Engineering (Nomination Packet)
Dr. James Rains came to Georgia Tech with the intent to guide the next generation of biomedical engineers by coaching healthcare startups in the CREATE-X Initiative and leading the BME Capstone program. Dr. Rains is very enthusiastic about helping his students succeed, and he does this by using his experience and connections to help students understand and create bonds in the biomedical industry. Under Dr. Rains’ leadership for the past six years, the BME Capstone has ranked the third best in the country and has more healthcare collaborators than any other program in the nation.

Emily Weigel, Academic Professional, Biological Sciences (Nomination Packet)
Dr. Emily Weigel specializes in teaching methods that promote collaboration, ensure authentic science practices, and involve continual assessment. She uses a flipped-class approach--she invites students to become familiar with course content prior to class, then dig deeper into the content through activities in class.  Dr. Weigel takes her students beyond the classroom to study Biology too. For example, her students contribute to the US Fish and Wildlife and Environmental Protection Agency’s water quality management program in Proctor Creek. Dr. Weigel’s approach allows her to engage her students in real-world science, assess their learning, and adapt her teaching in response. The result? Her students learn—and they enjoy Biology!

Per accessibility compliance standards, this page may have links to files that would require the downloading of additional software: