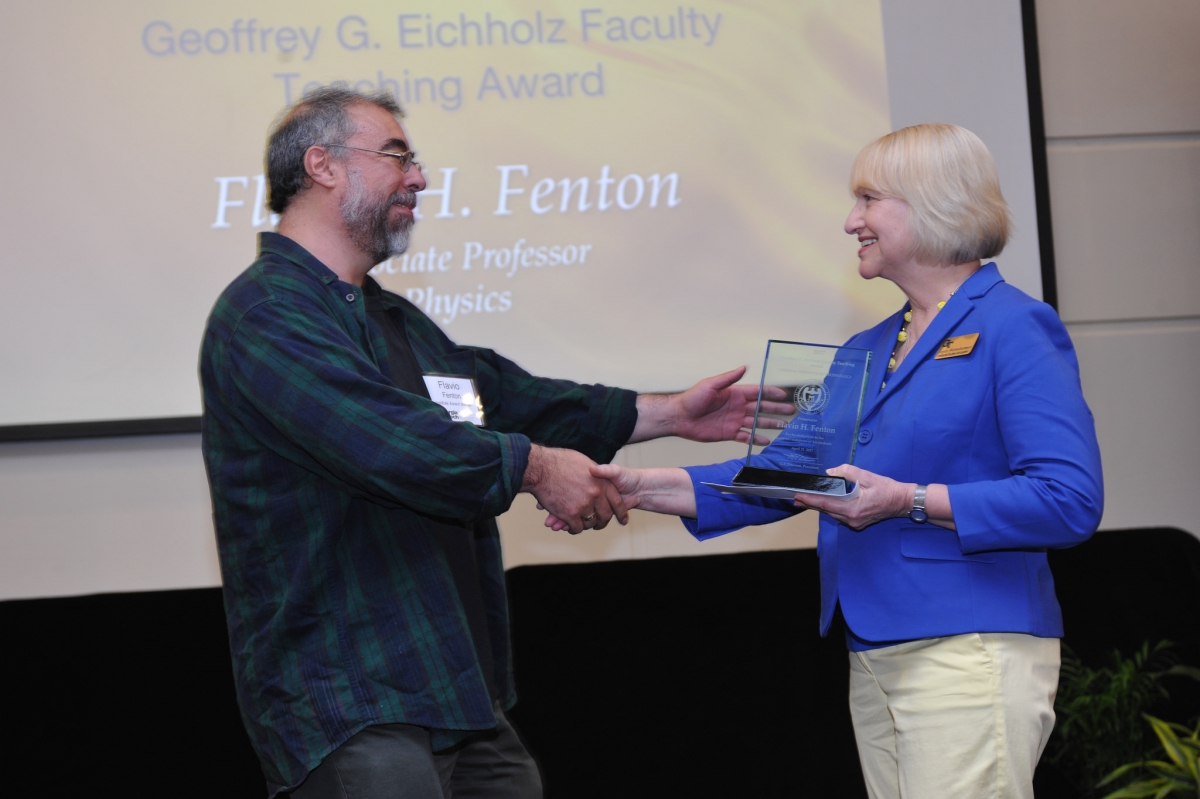 This annual award recognizes faculty who provide outstanding teaching to students in core and general education undergraduate courses.  Up to two awards will be given each year, and each recipient will receive $3,000.

This award was established in 2005 through a gift from School of Mechanical Engineering's Regents’ Professor Emeritus Geoffrey Eichholz. It was created to reward senior faculty members who made a long-term contribution to introductory undergraduate education and were outstanding teachers for students taking freshman and sophomore core courses. Recently, the award has broadened to recognize faculty at any point in their careers who excel in teaching core and general education courses, and who help students establish a solid foundation for their education at Georgia Tech.

The nomination packet (which should be no more than 15 pages) should be submitted as a PDF file through the Georgia Tech awards portal: https://gatech.infoready4.com. It should include the following items:

The Center for Teaching and Learning establishes a committee consisting of previous Georgia Tech educational award winners to review the nomination packets and select the winners of this award.  Each nominee's submission of demonstrated excellence is reviewed in the context of departmental and institutional standards. Evaluation/endorsement of the nominee's exemplary performance is provided by letters from the department chair, a campus colleague, and students.  Selection criteria include:

Dan Margalit – Mathematics (Nomination Packet)
Dr. Dan Margalit is one of the highest-rated instructors in the School of Mathematics. Margalit was on the 2014 committee to revamping the lower-level math courses Tech offers and led to the creation of Math 1553 (Linear Algebra). In addition to helping develop the course, Margalit was among the first instructors to teach it and has done so for nine semesters. He actively tries to familiarize himself with students, learning everyone’s name, and engages in casual conversation with them. He additionally helps run multiple programs that help students learn more about advanced mathematics in the real world, such as the Directed Reading Program (DPR) and Research Experiences for Undergraduates (REU).  Dr. Margalit’s attentiveness to student engagement and creative approaches to teaching, including creating songs about the lesson material, has made him a beloved instructor in the School of Mathematics department.

Amy D’Unger – History and Sociology (Nomination Packet)
As a sociology instructor at a university dominated by STEM, Dr. Amy D’Unger understands that hers may be one of the few social science courses students will take.  She strives to ensure that students learn to critically think about and fix social injustices. Since 2007, D’Unger has been the Associate Director of Undergraduate Studies and the undergraduate advisor in the School of History and Sociology.  She teaches a plethora of sociology courses, all with the intent to help students draw connections between the information they learn in the classroom and their understanding of the outside world. Classes refer to social science research, historical context, as well as current events in the news and pop culture to illustrate the relevancy of these issues and how they affect the world today. Students engage in open-minded discussions where they are given the opportunity to share their experiences, creating an inclusive and supportive environment for learning.

2020
Shana Kerr, Senior Academic Professional, Biological Sciences (Nomination Packet)
Since her start at Georgia Tech eight years ago, Dr. Shana Kerr has taught introductory biology courses and been heavily involved in the TA training program. She is constantly revising the pedagogies applied in the classroom to enhance students’ understanding of course content. Dr. Kerr recently reinitiated a biology major program dedicated to cultivating student engagement called the Biology Student Advisory Committee (BSAC). She has also updated curriculum in a way that increased students access to resources; her project to help align the skills learned in the introductory biology courses to prepare them for their higher-level courses led to the development of a virtual study guide that replaced the expensive textbook for introductory Biological Principles. One student says, “She truly is both a strong pillar of support for her students outside the classroom bettering the Georgia Tech community and also a diligent, willing resource inside the classroom.”

Pamela Pollet, Senior Research Scientist, Chemistry and Biochemistry (Nomination Packet)
Dr. Pamela Pollet brings a unique mixture of research perspective, practical knowledge, and teaching skill to the classroom. Since starting at Tech as a research scientist in 2002, Dr. Pollet has become a senior research scientist, an Academic Professional, and the chair of the School of Chemistry and Biochemistry’s safety and risk management committee. Dr. Pollet constructed a new hybrid organic chemistry course for the College of Science study-abroad program in France last summer that allowed for students to do some of their coursework online and in-person. She is also a co-leader of an organic chemistry tutoring program for all organic courses offered at Tech, supporting over 200 students every semester. Her students praise her highly, one stating, “Her character, dedication to learning, and kind nature has impacted the lives of countless students, and I sincerely believe that there is no other professor as deserving of this award.”

2019
Plamen lliev, Professor, Mathematics (Nomination Packet)
For fifteen and a half years, students have praised Dr. Plamen Iliev as helpful and innovative in his work. He’s taught nearly every undergraduate course offered in the School of Mathematics, with classes ranging in size from 1 to 400 students. No matter the course or size, he works hard to help everyone understand the content. A student in his Intro to Multivariable Calculus course says, “While the course material was indeed difficult, Dr. Iliev’s outstanding teaching and supportive approach greatly facilitated my learning, allowed me to grow and become confident in the material, and was one of the most important and determinative factors that helped me to succeed in this challenging course.”

Johnny Smith, Assistant Professor, History and Society and J.C. “Bud” Professor of Sports, Society and Technology (Nomination Packet)
Dr. Johnny Smith created the interdisciplinary program in Sports, Society and Technology, and helped shape a curriculum that challenged students to consider sports as more than just athletics, but as an institution that holds strong political and cultural influence in our world. He pushes them to do more than memorize historical facts, as this student remarks, “He made history into a narrative, and he made me want to listen and understand a real progression of events instead of simply memorize for a test,” Many others have reported Dr. Smith’s class has transformed their outlook on both history and life.

Per accessibility compliance standards, this page may have links to files that would require the downloading of additional software: